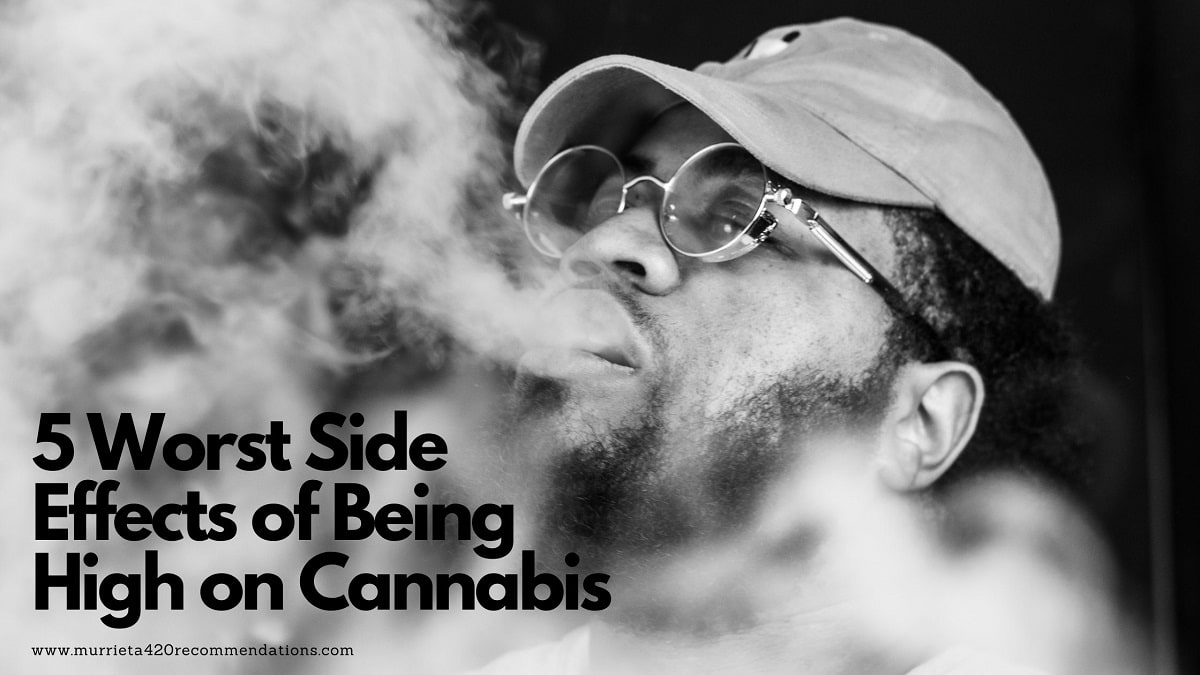 5 Worst Side Effects of Being High on Cannabis

Cannabis is famous for its therapeutic properties. In fact, the herb is so into the lives of people now that there are more than 3 million people in the country who possess a medical cannabis card. The benefits of cannabis are simply unmatched!

However, while the herb offers some of the most amazing medicinal benefits, you must not forget that things may also go south sometimes with its usage. Smoking cannabis is not all sunshine and roses all the time.

As per 420 experts, cannabis use can induce varying effects on different people. While, for some, THC is all enjoyable and euphoric, to others, it may call for extremely unpleasant dysphoria. Now, cannabis surely isn’t fatal, but you wouldn’t want to have a bad high too. And to avoid such scenarios, the first step is to have knowledge of it. In this article, we’re going to work exactly on the same.

Here is a list of five of the worst side effects that can be induced by consuming cannabis.

The term psychosis is what we use to describe instances where a person cannot differentiate between his thoughts and reality. Some of the examples include delusion, confused and disturbed thoughts, and lack of self-awareness.

Cannabis is being associated with such instances for a very long time. As per the research on the herb, the chances of having a psychotic episode are almost double for cannabis consumers as compared to others.

As per the experts, psychosis is perhaps one of the worst things that may happen to you if you consuming cannabis. And if you somehow find yourself stuck with it, you must cut back on your usage.

Anxiety as a side effect of cannabis use may come as a surprise to some people. After all, many use the herb against this very problem. However, the effect may actually occur. In fact, it is far more common than you think, especially for inexperienced users.

But how can a remedy cause an ailment?

See, the problem with cannabis is that the effects of it are biphasic, which means they vary as per the dosage as well as your tolerance toward it. So, if the dose you consume is low, it will help you get relief from anxiety. But if the dose is high, it will do the exact opposite.

Cannabis may also impair your short-term memory. And so, if you consume it just before doing any memory-related tasks, you may find them extremely difficult. You’ll take a long time to complete even some very simple tasks.

Though this particular effect of consuming too much cannabis isn’t that chronic as compared to others on the list, it’s still worth mentioning. Not being able to remember small things can make it very difficult for you to go about even your day to day tasks. And this can be a cause of great concern for a lot of people.

If you are thinking of getting a medical cannabis card, I’m assuming you’ve seen some of your friends getting high. Or you may even have tried the herb yourself if you live in a recreational state. And if so, you most likely know that there is a lot of difference between the behaviors of a cannabis user and a sober person. But do you know what’s the reason behind it?

This difference in behavior is usually a result of mood swings due to cannabis. In fact, consuming cannabis can induce several emotions, including fear, anger, sadness, etc. depending upon the situation. And this is the reason why some people can’t interact positively with strangers when they’re high.

Consuming cannabis, in some cases, may also cause you to hallucinate. However, the effects aren’t permanent as in the case of Schizophrenia. Plus, it mostly happens when you consume too much of high potent cannabis. When hallucinations happen, the person may get visuals of something that isn’t actually there. Along with it, delusions are also quite common with a bad cannabis high.